We are Here to Help You Succeed!

A dislocated worker is an individual who meets one of the five definitions required for certification as a Dislocated Worker:

1a)  Has been terminated or laid off, or has received a notice of termination or layoff from employment; AND

1c)  It is unlikely to return to a previous industry or occupation.

2) Has been terminated or laid off, or received notification of termination or layoff, from employment as a result of a permanent closure of, or substantial layoff at, a plant, facility, or enterprise; OR Is employed at a facility, where the employer has made the general announcement that the facility will close within 180 days.

3) Was self-employed (including employment as a farmer, a rancher, or a fisherman) but is unemployed as a result of general economic conditions in the community or because of a natural disaster.

4) Is a displaced homemaker. The term “displaced homemaker” means an individual who has been providing unpaid services to a family member in the home and who has been dependent on the income of another family member but is no longer supported by that income; OR, is the dependent spouse of a member of the Armed Forces on active duty and whose family income is significantly reduced because of a deployment, call or order to active duty, a permanent change of station or the service-connected death or disability of the member AND is unemployed or underemployed and is experiencing difficulty in obtaining or upgrading employment. 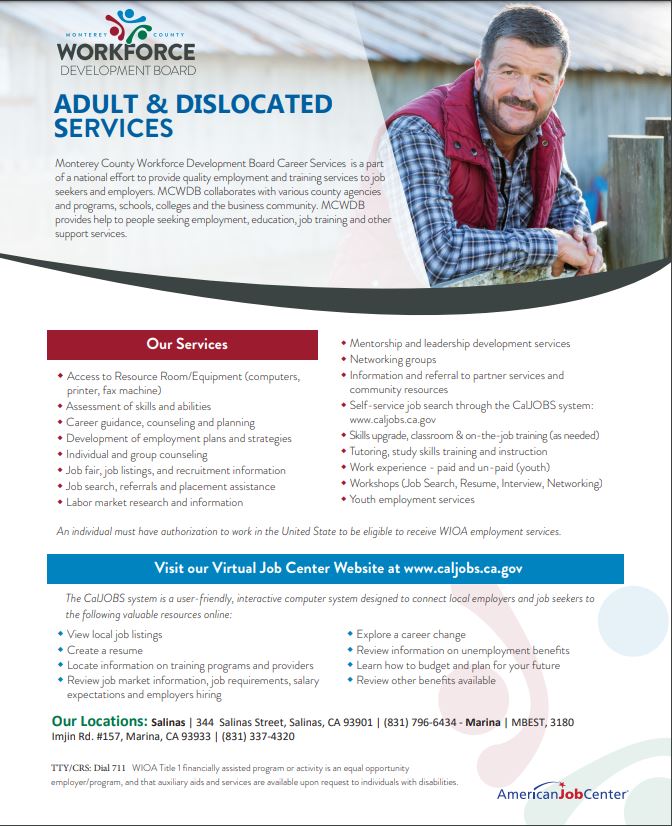 Referral Based Program Only
The KickStart Program is available on a referral base only.
(Non-referral services and programs are listed above).
KickStart Re-Entry Employment Program (AB-109 Referral Based Only)
20 E. Alisal Street, Salinas, CA 93901
(831) 796-1231